Our complete offer of research models

Do you need a transgenic model ?

Do you need a scientific advice ?

Description of our model

The DBA is the oldest of all inbred strains of mice. Its story begins in 1909 when Dr. CC LITTLE began inbreeding and selecting for coat color. From 1929 until 1930 crosses were made among substrains, and several new strains were established including DBA/1 and DBA/2.

DBA/1 and DBA/2 differ at a large number of loci (Car2, Ce2, Hc, H2, IF1, Lsh, Tla, and Qa3) including the MHC (Major Histocompatibility Complex) H2 Haplotype.
This heterozygosity is most likely a result of residual heterozygosity in the strain when the substrains were separated. The strain was sent to Dr MIDLER in 1938, then to the N. I. H. in 1951, then to The Jackson Laboratory in the 1980’s. This strain is used in multiple research fields, e.g. in cardiovascular biology or neurobiology.

DBA/2J are not very sensitive to the development of atherosclerotic lesions of the aorta even following a 14-week atherogenic diet. It shows hearing loss of high frequencies starting at weaning (3-4 weeks); this hearing loss becomes severe by 2-3 months of age. This strain has 3 recessive alleles responsible for this progressive cochlear pathology that starts by affecting the organ of Corti. A decrease in volume of the anteroventral nucleus of the cochlea and the parallel loss of neurons lead to a progressive decrease of peripheral hearing.

Young DBA/2J inbred mice are susceptible to audiogenic seizures due to the asp2 mutation; however, this susceptibility decreases as animals reach adulthood. This strain also presents high rates of calcareous pericarditis, calcified lesions of the testicles, tongue and muscles.

Important notice: This strain is homozygous for the Cdh23ahl mutation which leads to age-related hearing loss. Its expression on a DBA/2 background results in progressive hearing loss with onset after 3 months of age. There is no GpnmbR150X (responsible for the iris dispersion) in our DBA/2JRj strain. This mutation first appeared in the 1980’s. JANVIER LABS acquired the strain from the Zentralinstitutfuer Versuchstierzucht in Hanover. They in turn held it from The Jackson Laboratory in 1980. Animals transferred then were not carrying the mutation. The Ptprcb (= Ly5b or CD45.2) (protein tyrosine phosphatase receptor type c, b variant) recessive allele on chromosome 1 is present in this strain. 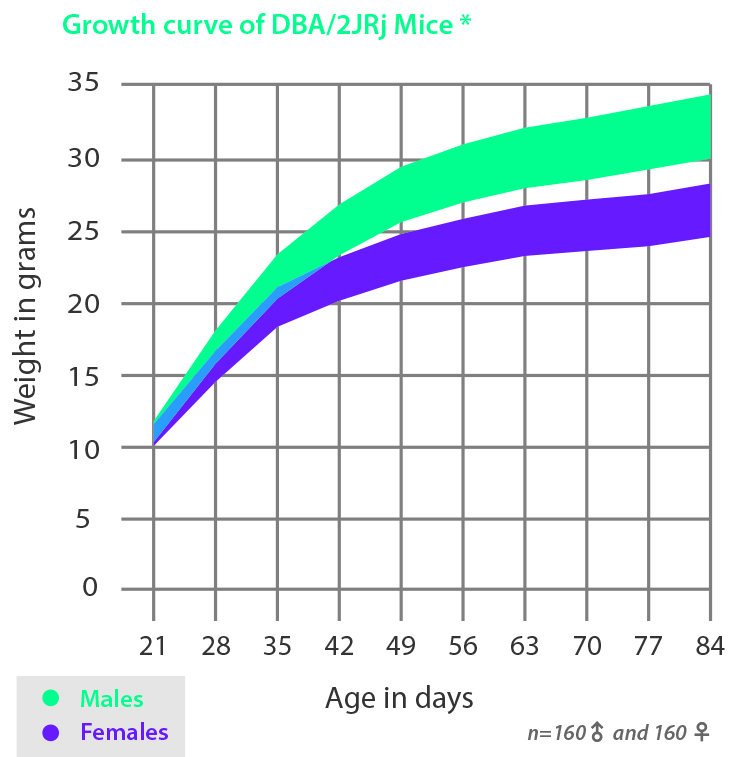 The following Janvier Labs’ data is for information purposes only

Research has been conducted, all over the world, from models bred in our laboratories. ...Library being updated...

Services and research models that may be of interest to you